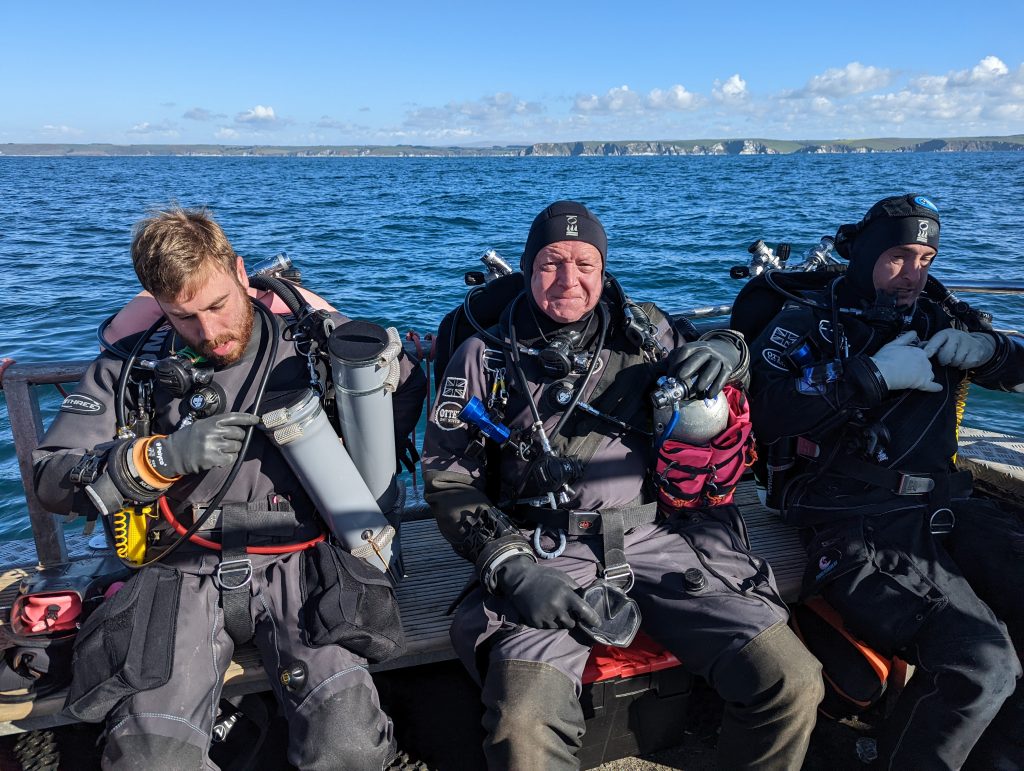 In April 2022, a team of our divers assembled in Plymouth for a weekend of gear recovery sponsored by the ever-popular dryrobe. Here, one of the team’s newest members Brennig Neal gives his personal account of his first Ghost Fishing UK project. Did the weekend meet his expectations?

Calm seas and a change of plans

Following a night of introductions and exchange of recent diving anecdotes, the Ghost Fishing UK team was up bright and early for an 8.30am ropes off with the stellar In Deep team out of Mount Batten in Plymouth, UK. As gear was loaded onto the boat and drysuits were donned, a feeling of excitement began brewing within me. I had been keen to be part of the team and attend my first project since my fantastic training weekend in late 2021. Now I was finally getting the chance.

The plan had originally been for survey work on the Saturday and gear recovery on the Sunday. But, with the sun shining and calm seas predicted for the day, plans were changed and the recovery would commence today. The target was the Oregon shipwreck lying in thirty-four metres of water on the seabed. The team’s previous survey recorded ghost gear throughout the wreckage including a towering monstrosity of net that hovered over the ship’s stern.

Teams were chosen and objectives assigned. Instructor Fred Nunn, diver Chris Hawes and I were tasked with tackling the towering stern net. Luckily, Fred had brought his (not so) secret weapon. The underwater angle grinder. As we descended down the shot line towards the wreck and the target came into view, the underlying excitement I had harboured since the morning began to erupt, forcing a smile visible even from behind my regulator. I was finally doing it!

The team quickly began work, assessing how to tackle the task at hand safely and efficiently. Working at a depth of thirty-four metres meant limited time on the bottom so working smart was key. My role for the dive was the assistant/lift bag filler (aka bubble boy as I like to call it!).

Fred used his wealth of experience to identify points at which we would attach our reliable Halcyon lift bags to expose weak points and create tension to cut. After ten minutes of lifting, cutting and assessing how to tackle the gear – one final slice from Fred’s angle grinder sent the behemoth to the surface. It’s hard to describe the feeling of watching your first piece of ghost gear head to the surface, especially if it’s this big. The smiles, audible cheering and handshakes underwater should give you an idea!

After a tasty (obviously) Cornish pasty on the boat for lunch, we headed over to the shallower wreck of the Kingston Alalite for a survey dive. A bundle of crab pots and rope was identified and declared the target for the next day’s diving. 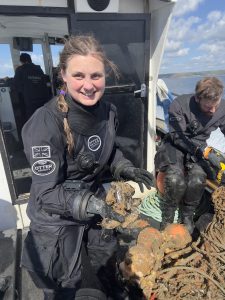 Sunday presented some challenges for the team. A poor weather forecast meant rough seas were ahead of us. We were also joined by two wonderful members of the dryrobe team and a videographer that would help capture and record the day’s work. Space on the deck was at a premium and choppy seas meant staying still in that space was nearly impossible.

As the target was confined to one area of the wreckage, we decided that sending teams in waves was the best way to tackle the task at hand. I was once again teamed with Fred but also now joined by the cheery Tom Ball. As teams entered the water before us and began their work, pots began springing up in rapid succession. We had the incredible support of a local fisherman who would swing by and gather the pots as they emerged. It was clear to me how support from the fishing community is an essential part of the work done by Ghost Fishing UK up and down the country.

Finally it was our time to head under. By this point, all but two of the pots had been surfaced by the previous teams so we quickly got to work finding and lifting them. We were able to complete the team’s objectives for the day. With our remaining time, we sent another chunk of netting up and conducted a quick update survey for the area. There’s a lot more work to be done in that area and I’m already chomping at the bit to head back and finish what we started!

As we headed into port to close off the weekend, I felt a strong sense of accomplishment but at the same time a little blue (and not because of the rough seas that day). It had been an incredible weekend for me and had surpassed my expectations in every regard, so to see it come to an end was disappointing. From just one weekend with Ghost Fishing UK, I know many more missions are to come and can’t wait to get stuck in with upcoming projects over the course of the year.

I’d like to extend a personal thank you to all the Ghost Fishing UK team involved with this weekend. I was welcomed into the team and made to feel as if I was part of a family. Thank you to James and AJ from In Deep for their awesome service over the weekend and letting us cover their deck with many a sea squirt (sorry again!). And of course a huge thank you to dryrobe for allowing this weekend to take place – without your support, none of this weekend would be possible.