Ally Mitchell has been a commercial diver for thirteen years. He learned to dive in Fort William at the Underwater Centre and from there diving has taken him all over Scotland and beyond. Here he describes a salvage operation that led him on a product development journey as he tried to close the circle on ocean waste plastic.

I started off working on scuba commercially around the Isle of Skye, before moving to surface supplied equipment and a decent time spent at Faslane Naval Base near Helensburgh. I started diving offshore in 2010 using surface decompression techniques, where you decompress on pure oxygen in a chamber on the ship after your dive. From there I progressed to saturation diving, where you live in the chamber for up to twenty-eight days at a time, diving as a three-man team. I’ve been a saturation diver for the last five years. I’ve worked around the world including Singapore, Congo, Trinidad, Ivory Coast, and pretty much most of Europe.

It was saturation diving that I met Christine Grosart, who was our medic onboard our boat and she introduced me to Ghost Fishing UK of which she is a trustee. I loved the concept and had always cared about the sea. Being able to use my skills as a diver to do something positive for the environment really motivates me.

I have recently started a company making plant pots from discarded rope, fishing net and beach plastic. I’d like to share my story with you…

On 2nd December 2019 a ten year-old sperm whale weighing twenty tonnes died after becoming stranded on a sandbar near the beach at Luskentyre on the Isle of Harris in the Outer Hebrides of Scotland.

During a post-mortem its stomach was found to contain 100 kilograms of ocean waste plastic. Fishing nets, rope, packing straps, bags and plastic cups were some of the items amongst the compacted mass found in the mammal’s stomach.

The whale’s death was shocking and was reported around the world. The discovery of the contents of its stomach made the New York Times.

Three months later on Monday 23rd March 2020, the general cargo vessel MV Kaami ran aground on a rocky outcrop between the Isle of Harris and the Isle Skye. It was 2am during stormy winds and very high seas, twenty kilometres from Luskentyre Beach.

Her cargo was 1927 tonnes of pelletised refuse-derived fuel (shredded plastic and waste material) destined to to be incinerated and which, if spilled, posed an immediate risk to the environment.

I was asked to join a small team of divers as part of the salvage operation. The MV Kaami was deemed an emergency by the UK government. HM Coastguard and the salvage team were immediately tasked with stopping the vessel and its cargo from polluting the environment.

I hold the Western Isles and Skye very close to my heart and have spent a lot of time there working and on holiday with my family. My grandparents are from the Isle of Lewis which is an amazing part of the world and one of my favourite places.

The threat to the environment from waste plastic is stark. During the salvage I saw otters, seals and sea eagles. The threat to these animals and other wildlife from plastic pollution is very real. We retrieved two lorry loads of rope and other marine debris and contaminants from the vessel. It sparked a desire in me to create a product from waste and to try to do my bit to tackle the growing problem of pollution in our oceans.

I had started to collect waste plastic from the ship’s hold in the pockets of my diving suit during each dive. I thought that if I could make it into a product there was an opportunity to reduce our consumption of new plastic and demonstrate it is possible to turn discarded material into products that have a benefit to the environment.

In he evening I also carried out my own beach cleans around Uig, collecting the plastic debris that had washed up. I returned home following the successful salvage of the Kaami and set to work learning how to manufacture with plastic. 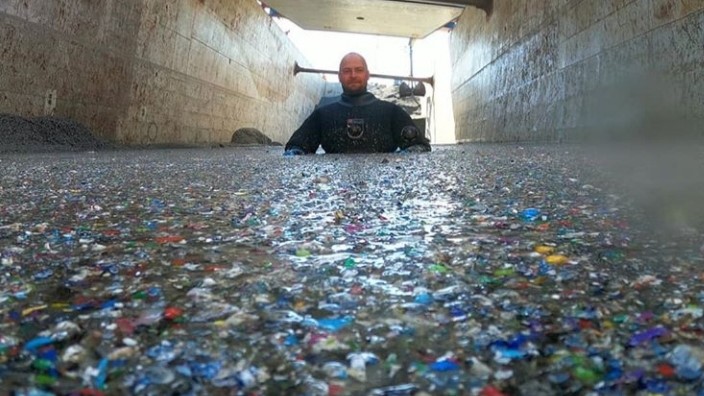 I had spent a lot of time in the garden and in my house growing chillies and sunflowers on window ledges with my two young children. As well as being quite a fun thing to do it’s also a good medium for teaching. I used the plants to teach my children about the importance of growing our own fruit and veg, pointing out bees and other pollinators, and the need to care for our environment.

It occurred to me a few times that plant pots are made from polypropylene…so why didn’t they use old rope to make plant pots?

I started to study manufacturing techniques and recycling methods for plastic. Through various ideas and concepts I settled on a plant pot design, made from a single cavity mould that could be made from waste plastic.

The manufacturing technique was developed through trial and error. Various moulds were made and techniques tried. Each failure was frustrating but I treated it as a learning curve and eventually made progress.

Recycled plastic is shredded and more coarse once it’s returned to granular form than virgin pellets. It doesn’t work well with normal manufacturing techniques, particularly fine moulds with high tolerance levels. It also loses some of its ‘workable’ properties making it harder to manufacture with.

I worked with a machine specialist in Europe and a mould maker in Colombia to build a set of equipment that could shred waste plastic and then mould it into a plant pot efficiently and at an economically viable rate.

Early on I found it was more efficient if I concentrated on manufacturing, letting the experts recycle the waste, whilst we aided collection. I partnered with a recycler of end of life rope and fishing net and started manufacturing plant pots with this. Then I added beach plastic collected during my own beach cleans to add random patterns and colours through the pots. I wanted my pots to demonstrate that they’re made from a waste material not to try to create a uniform colour. This is counter to pretty much all of what the rest of the plastics industry is trying to achieve.

Once the manufacturing process had been established I set about adding the plastic that I had collected from the hold of the Kaami. I added material from a small blue ball into a mix of recycled rope to make a plant pot with a distinctive blue and green pattern. Ocean Plastic Pots was born!

I was fortunate to be invited to a food market in Edinburgh where I planted up a batch of my small pots and sold them with herbs in. I used this as a means of speaking to my customers to establish whether there was a market for my product. I did this consecutively over a number of weeks. Remarkably the pots were very well received and I had a lot of positive feedback that guided the plant pot design. I tweaked the design further, adding a small tray and drainage hole. This created my second prototype pot, which is handmade, 4 mm thick, and 9 cm in diameter.

This pot was well received but I had reached the limits of what I could do with my own manufacturing machine in terms of size and volume. Every time I increased the size of the pot my production volume decreased dramatically.

I had identified early on that to make this project viable I needed an external manufacturer. In the autumn of 2020 I met with a product design company in Glasgow. From there I found a manufacturer in Scotland. Manufacturing in the UK keeps the carbon footprint small and allows me to have more control of the end result. It also invests in the economy at a time when the UK has never faced such economic challenges.

My first 13 cm plant pot will be on sale the week commencing 7th December 2020. Aimed as a decorative interior pot (although its multi-purpose) it’s made of 100 percent recycled rope and fishing net. It is 4 mm thick, robust, and contains no virgin plastic. It can be easily recycled again at the end of its life creating a circular economy from waste. I do not add any colour additives to the raw material – my pots take their colour from the waste material from which they are made.

Our stickers are also made from polypropylene so they do not need to be removed before recycling, making the process even easier.

I have a number of exciting projects coming up in 2021 including working with material directly collected by Ghost Fishing UK (subject to trials and Covid-19 allowing). I’m hoping to complete my ghost fishing training, arrange a number of beach cleans, events and contribute to the work of Ghost Fishing UK too.