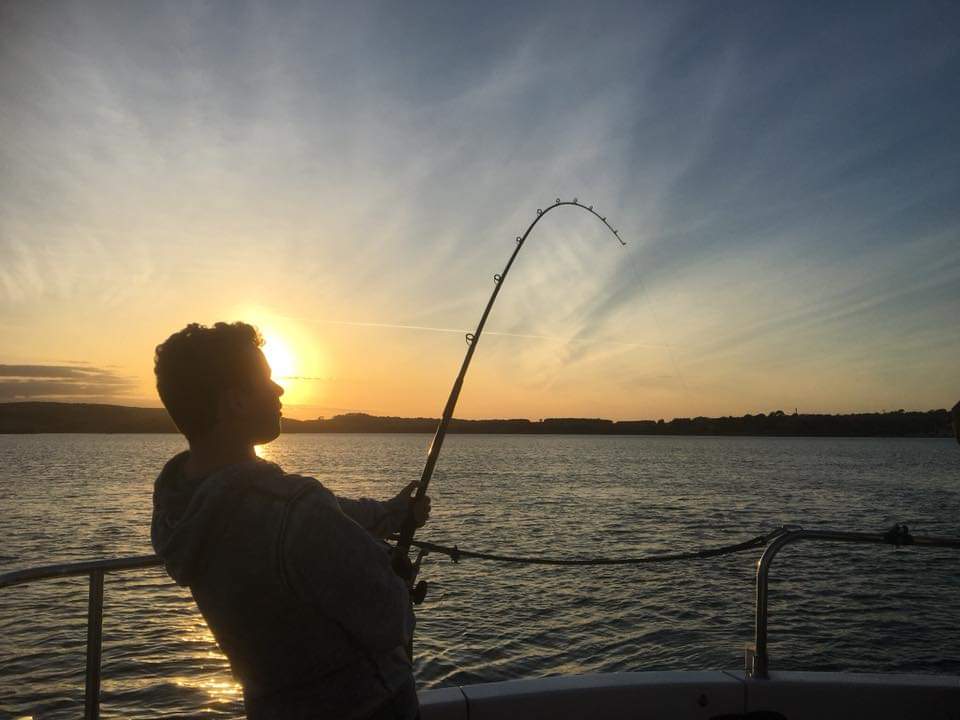 GFUK Hi Kevin, first of all thank you so much for supporting and volunteering for Ghost Fishing UK. For our readers, can you tell us how you first heard about Ghost Fishing UK?

Kevin No problems at all with the support! You folks do such an amazing job at what you do and should be getting massive support from far and wide. I first heard about Ghost Fishing UK through social media; the charity was running a training session in Plymouth and I offered straight away the services of our charter vessel for the recovery of lost gear.

GFUK As a fisherman, how do you think lost fishing gear affects the marine life and habitats in your region?

Kevin Sadly, the issue of lost gear here off Plymouth is profound. I’d doubt that there’s a wreck out there that we fish that does not have lost nets or trawls on it. We have recovered many large pieces of net that have been hanging off the sides of wrecks when they have snagged on our anchor. In all of these we remove live and dead marine life.

The nets are very good at what they are designed for – catching fish and lasting a long time in harsh environments. In the last piece we removed we freed thirty-five edible crabs and eleven spider crabs still alive; the piece of net filled two 7 stone fish boxes.

The cycle of death in these lost nets continues almost indefinitely. Dead marine life in the net attracts more to feed on it, this in turn leads to more entanglements.

We operate from Plymouth, across the channel to the Channels Isles, as far east as Weymouth and as far west as Penzance. In this vast area there are literally thousands of wrecks and reef pinnacles that are frequented by net fishermen and trawlers. The majority of the wrecks for sure have lost gear on them.

GFUK Conservation organisations are often viewed with suspicion by the fishing community, what made you engage with Ghost Fishing UK? How do you think other fishermen would benefit from talking to the charity?

Kevin Sadly, there are many organisations doing amazing work but are not given a second look by the very people they seek to help. Fishing can be a destructive activity and anyone highlighting the negative effects will be viewed with suspicion.

What I find hard to swallow is the fact that many believe that organisations that highlight the effects of ghost gear are anti-fishing. You at Ghost Fishing UK have made it very clear on many occasions that you are not anti-fishing.

I guess that the ghost gear aspect generates more press and therefore more interest in your activity, this same attention is what could be making some people in the industry wary.

Why would they highlight the negative aspects of their practice? I engaged with you as I could see past this to the amazing work that you do. The industry does not purposely discard the gear on the wrecks and its removal is not only financially beneficial (in the return of the gear) but also in the maintenance of the very stocks they depend on. I would imagine that a greater emphasis on the return of the gear or the removal of lost gear catching the fish they want to catch would attract the doubters better.

GFUK You’ve been out on missions with us and offered your boat for a BBC TV crew. Why do you think it is important for the public at large to understand how fishing and conservation can work together?

Kevin Remarkably, the industry has no formal means in place that I am aware of, to deal with gear lost or discarded at sea. If this level of waste were being discarded or lost on land the wider public would be far more aware and the industry responsible would be made to deal with it. We offered (and continue to offer) our services as we feel that you should not be paying for the vessels for the removal and recovery of the material.

The job you do is second to none out there, and to have to do it from your own pocket does not sit well with me. Wider public awareness could eventually lead to a responsibility of the industry to account for the recovery of lost gear. Aside to this, case studies of fishermen reporting lost gear to you and the cycle of recovery and return being documented with the gear back on the boats could show not only the public but also other fishermen the strength of what you do.

GFUK The fishing industry is going through a tough time at the moment, not least due to Brexit. Do you think there will ever be a good time for fisheries and conservationists to get their heads together?

Kevin Those with the mentality of ‘catch it before someone else does’ will sadly rarely engage with others whether it benefits them or not. From the outside looking in it is always a good time for the two to engage with each other.

There need be no reason why the ‘two sides’ cannot sing from the same sheet. The fishermen need the gear removing to prevent poor catches from the wrecks and reefs they fish, or the return of lost gear, and you are there to do both. My major concerns over the whole process is that you fund the work or need the charitable status. I’d like to see the industry held responsible for your costs.

GFUK What does the ocean mean to you and why are you interested in protecting it, as well as making a living from it?

Kevin I have grown up at sea. I can navigate the waters and recognise the shapes of the bottom features better than I can find my way around on land. Having a commercial rod and line fishing background in the past and a present role in charter fishing and diving I rely on the health of the local waters for an income. I am concerned by the levels of waste in the waters of our coast and any means to reduce it I will actively engage with. Alongside the support we offer you we are also helping with the 1000 Tyre Project in Plymouth sound where the tyres have been located and are to be removed for disposal.

GFUK After such a disastrous last 12 months, what does the future hold for your vessel and business?

Kevin The lockdown periods have dramatically affected the business. It is not lost on us how lucky we are to still have the ability to operate as the restrictions are lifted but we have had several very close calls to shutting down due to the loss of trade. The diary is filled nicely with prospective trips throughout the rest of the year but we are now at the mercy of the weather.

Even if we were to fulfil every trip in the diary we would still not recover the losses of the season so far. Perhaps our biggest upset through this time is the theft of equipment. We are lucky that we are still able to trade, and I’m sure that there are many out there not so fortunate. But sadly this could be the route to our loss of kit. During the lockdown period we have had the major structural piece of our dive ladder stolen, presumable for the scrap value of the aluminium.

Although we enjoy our diving and shark snorkelling trips they are not the mainstay of our operations. With that being the case it is unlikely that we will be able to replace it this year. This will result in planned trips being offered to other vessels so that the customers do not miss out and a further reduced income for us.