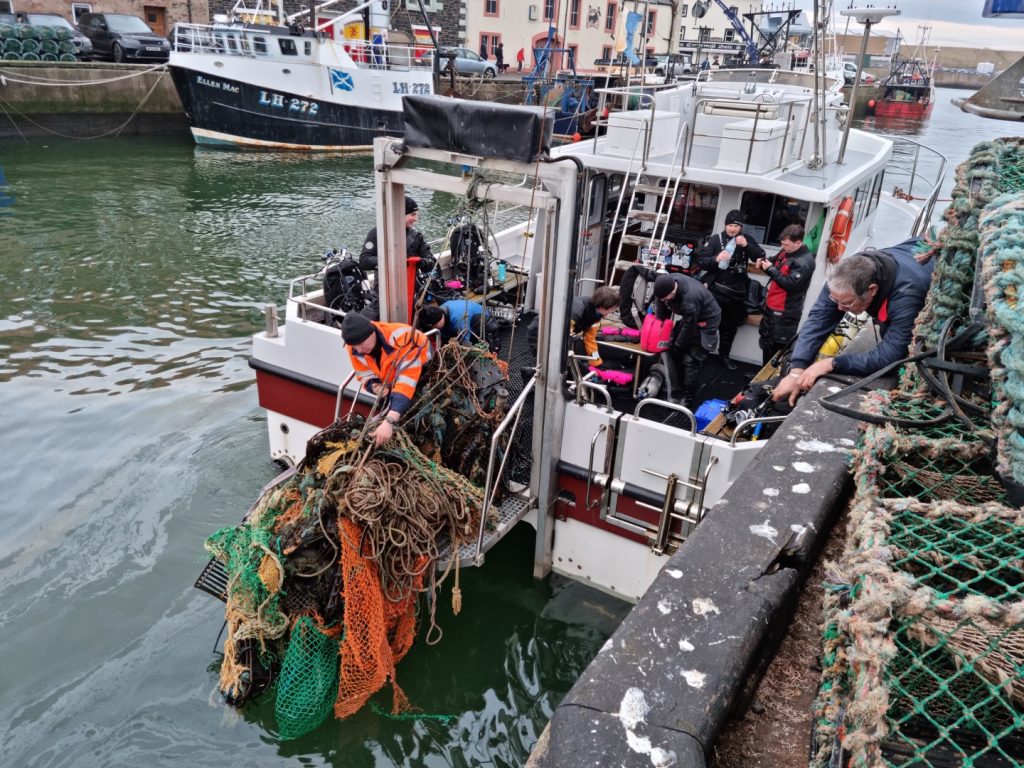 The weekend of 15th and 16th January 2022 saw the Ghost Fishing UK team in Eyemouth on the east coast of Scotland once more, diving off Wavedancer II with skipper Gary Steenvoorden.

With ropes off shortly before 8am the team headed out to the wreck of the Glanmire. Once the kit was ready they headed into the cabin for a briefing by project leader Jamie Vaughan. The goal was to find and survey some pots that had been reported lost on the wreck, take note of any entanglements and check for signs of crabs or lobsters cutting themselves free (could this be true or a fisherman’s tale?). If while performing the survey it was deemed an easy lift then it would be up to the team leads, Martin Maple and Ryan Mcshane, to make that call. We did not want to leave anything down on the wreck overnight as we are unsure if we would be able to dive the next day with the wind changing rapidly.

The divers entered the water at 08:40 and were met with two metres of visibility. Ryan’s team found a couple of pots but they were well jammed into the wreck and could not easily be removed. Unfortunately, with the visibility so poor underwater they are not sure where they were located! Martin’s team came across a recently lost fishing net which was swaying back and forth in the tide. It was only caught on the wreck at one end with a rope looped over a metal strut. After taking a video survey and checking it wasn’t caught Martin made the call with the team to lift it. It took one bag to send it to the surface and five minutes later the team were heading up as well.

Wavedancer II is a BlythCat 36 cat GRP catamaran, 11m long with a 5.1m beam and two 330 hp Cummins engines that give her a top speed of 20 knots. Her hydraulic diver lift has been made wider than a standard diver lift allowing easy entry for technical divers and ghost nets. Recovering the net was relatively easy as it was untangled and could be dragged onboard in a single piece and taken back to shore. 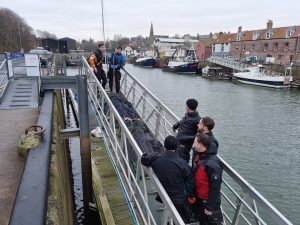 After a quick break for lunch the divers headed back out of the harbour and round to Burnmouth caves to do an underwater litter pick and use the remaining gas. Burnmouth caves tend to catch a lot of floating debris and is very often full of litter. Ryan’s team surfaced after twenty-five minutes as one of the team hit their minimum gas limit and hadn’t found anything at all. Martin’s team found a mass of net and broken creels and performed a survey. Their survey found that the mass was just sat on the sand and not entangled in anything. Divers Rob Corby and Alan Place attached their lift bags and Martin marked it with a ‘delayed surface marker buoy’ (which can be seen from the surface) and the team returned to the boat.

After a quick chat and a sketch provided by Alan a team was formed with those that still had plenty of gas. They descended onto the mass of net using the previously laid marker buoy as a ‘shotline’. The net lay in just ten metres of water and was again most likely lost a result of the recent storms. Three more lift bags were attached and it gently started to move in the swell before it left the bottom for the surface.

Again it was dragged onto the boat lift and lifted out the water and secured. Once back in port the net was lifted off the boat and onto the harbour with the Harbour lift. The started to cut the mass into sizable chunks and found there were more live fish trapped within the net so theses were released back into the sea.

Over the course of the weekend, the team of seven divers lifted about 500 kilograms of net and rubbish over four dives and two lifts. The first was a net laying on the Glanmire wreck, fresh enough not to have become entangled in the structure of the wreck yet, and the second was a mass of broken creels, rope and fishing net in a large, tangled lump which was found lying on the seabed.

We are grateful to DiveStay for boat and logistical support, and to the Eyemouth Harbour Trust for arranging storage and disposal of unrecyclable materials. The net went to Ocean Plastic Pots to be transformed into designer plant pots.