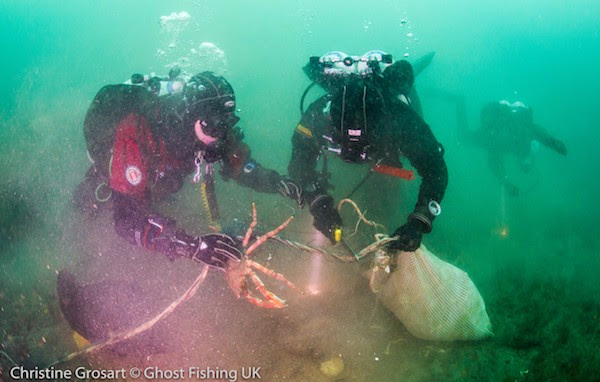 Abandoned, lost or discarded fishing gear (ALDFG) can damage marine habits, and kill marine animals and birds. Although the charismatic megafauna that fall victim to it attract attention, ghost fishing also depletes the species targeted by fishermen to the detriment of the fishery itself. In this article we look at some statistics that the Food and Agriculture Organisation of the United Nations has published to try to understand the impact.

1 percent of fishing gear is lost per vessel per year

6.4 million tonnes of marine debris are added to the world’s oceans every year, of which 10 percent by volume is fishing gear, although that can vary widely depending on where you are in the ocean.

4.4 kilometres of ghost nets per square kilometre of fishing grounds

The density of ghost nets in the sea is hard to estimate, but it helps to appreciate the scale of the problem.

35 weeks for fishing ability to drop to low levels

The catching ability of ALDFG will decrease over time. Passive fishing gear, such as gillnets, trammel nets, pots and traps, are the worst as they don’t rely on being towed by a boat in order to work. Automated re-baiting may occur when dead and dying animals act as bait for scavengers. The scavengers in turn release odours that add to the attraction of the fishing gear. Together these effects can enhance the ability of ghost gear to catch animals, even when it is no longer set in the most optimal way.

Researchers estimate how many fish are caught by a ghost net until its ability to catch has decreased to a low level (say five percent of what it could originally catch). Even at low levels ghost fishing may continue, and can result in many additional deaths given how long ALDFG remains in the sea.

0.5 to 30 percent of landed catch species removed by ghost fishing

ALDFG may go on fishing for the species it was originally intended to target. Fish may accumulate around ALDFG which can make it more likely that they become caught. This benefits no one in the end, and is just one of many reasons why we are cleaning up the sea one net at a time.

The statistics quoted in this blog post come from a review of published literature commissioned by the Food and Agriculture Organisation of the United Nations and apply to marine gillnet and trammel fisheries. The data sources are therefore likely to be trustworthy, but the uncertainty in each number is potentially quite high – more research is needed. This does not imply that the numbers are ‘worst-case’, and in fact may be conservative. Primary sources are given in the report.