The One Show. Video: BBC

“Hurry up,” I thought, impatiently. I was squashed up against the window seat of a Bristow AW139 helicopter, which had decided to take a tour of Aberdeen airport before finally allowing us to disembark. I struggled out of my life jacket, kicked off my flight suit and switched on my mobile phone, which hadn’t worked for the last three weeks offshore. I was about to demand a taxi when a text message pinged. “Hi, it’s Mark from The One Show. Are you free for a call?”

I flew home to Bristol, threw all my dive kit in the van and drove straight down to Falmouth where the Ghost Fishing UK team were already in the swing of surveying large lost nets on the wreck of the Epsilon.

Healthy Seas hooked up with us this year not only to support Ghost Fishing UK financially, but to bring in various partners in the textile industry and assist us with a ghost net disposal route. Importantly, they facilitate a pathway for ghost nets to be regenerated into Econyl yarn through an upcycling process at Aquafil‘s plant in Slovenia. This keeps the nets out of landfill and gives them a second life as a high quality product.

Healthy Seas had worked on a project with The One Show already and set us up with the prime time BBC tv programme. The BBC was keen to meet Ghost Fishing UK and film our work for a feature.

After a pleasant evening meal with the film crew and the divers, the next morning we set about loading the boat ready to recover a big trawl net, intermingled with monofilament. Lucy Siegle was the presenter and wanted to interview me. I’m far more comfortable behind the camera, doing the interviews myself and I picked up several tips from the professionals as we went. 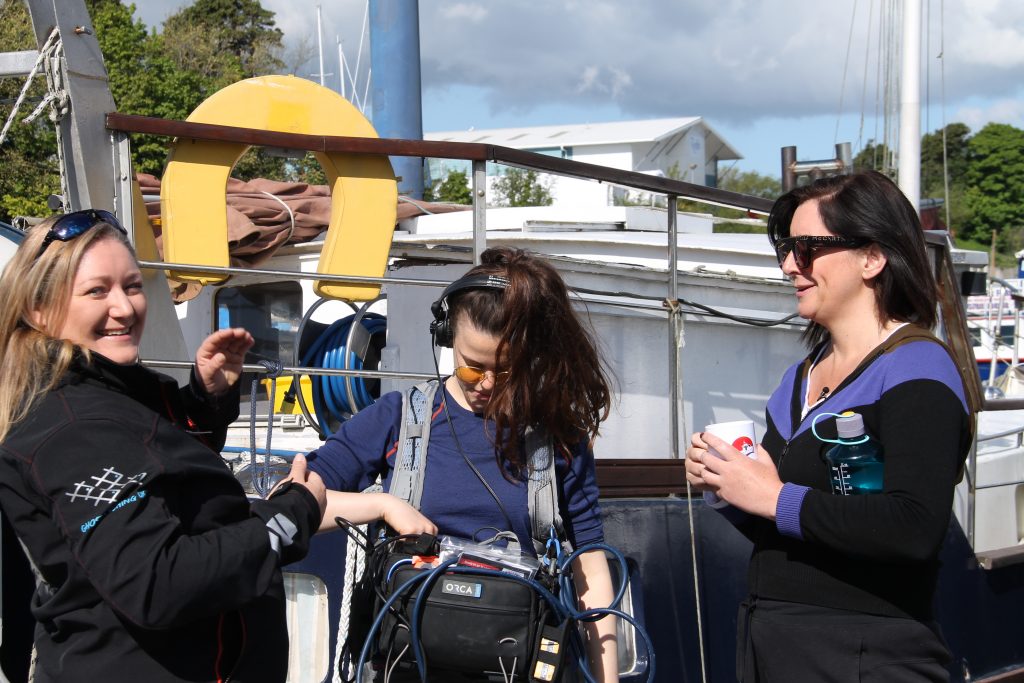 Christine (far left) with Lucy (right) and the BBC crew.

First, the “walking to the camera shot”. Lucy and I walked painfully slowly along the three foot wide jetty towards the camera, Lucy asking me open questions with me trying to answer them without looking where I was going. If I fell in, I thought, not only would the whole thing be ruined but our team of divers would probably be hospitalised with laughter…

An hour later, the producer asked us for a ‘foot shot’. Lucy and I stared at our feet in horror! We weren’t dressed for this! Who wants to look at our feet?! Neither of us were wearing Jimmy Choos! I had my scabby old work trainers on and Lucy had dressed for comfort too. Oh no… So there we were, doing an impression of the opening credits to “The Bill” (showing my age) along the jetty while our team let out audible yawns from the boat. They were getting sunburnt and impatient.

We wrapped up as the sound recordist captured background noise (who knew that was a thing?) and we jumped on board Gary Fox’s boat from Dive Action, Cornwall.

We always charter hard boats as they can take more divers than inflatable boats, making us more effective and efficient. For media jobs we often like to hire fishing boats or a second dive boat to assist with recovering the nets. Anglo Dawn skipper Andy Howell kindly stepped up to offer a vessel for the BBC film crew and also for landing the nets we recovered.

Mark, the director, had an ambitious idea to splice the underwater footage of the lift bags underwater and then breaching the surface with the net, by using a drone overhead. The beauty of working with Ghost Fishing divers is that they are meticulous in their planning and it was actually quite easy to schedule the shot. “The bags will be coming up forty minutes after the divers jump.” The crew looked at us with some skepticism but, true to our word, at forty minutes the drone was up in the air and took a fantastic aerial shot of all the bags and the muddy brown water stain from the nets breaching the surface.

Once back on the boat, Fred Nunn, John Wheeler and I jumped across to Anglo Dawn to help pull the huge tangle of nets on board and the camera crew got stuck in filming and recording everything they could. I was most impressed with the director as he rolled his sleeves up and grabbed the net and started helping to haul it in.

Lucy Siegle seized the opportunity for an ‘on the fly’ interview as we plucked trapped animals from the net. She squatted down at the back of the boat, which was starting to get a bit lively as we rocked side to side with the waves. She began asking me questions about the nets, the animals we were releasing and the problem the plastic nets would cause if left in the ocean. “So, Christine, tell me what it feels like to bring up one of these nets?” I began answering when she suddenly sprang to her feet, staggered over to the side of the boat and began feeding the fish! Perplexed, we waited a moment and she came back, wiped her mouth and carried on with the interview as if nothing had happened. Now that’s a professional!

Lucy was afforded the role of releasing an edible crab back into the sea and this made her day. We headed in to Falmouth marina to undergo the painstaking task of unloading the net, all the kit and wheeling it back to our cars and Fred’s trailer. The camera crew wanted shots of us unloading the huge, heavy nets and we set about passing it between half a dozen of us over the side of the boat and onto the jetty. It was super heavy, stank and got caught on everything. We had just about finished when the camera guy said “Awesome guys….I don’t suppose you could just do that again?” We all looked at each other and in unison replied, “No!”

1 thought on “Gettin’ down with the Beeb”