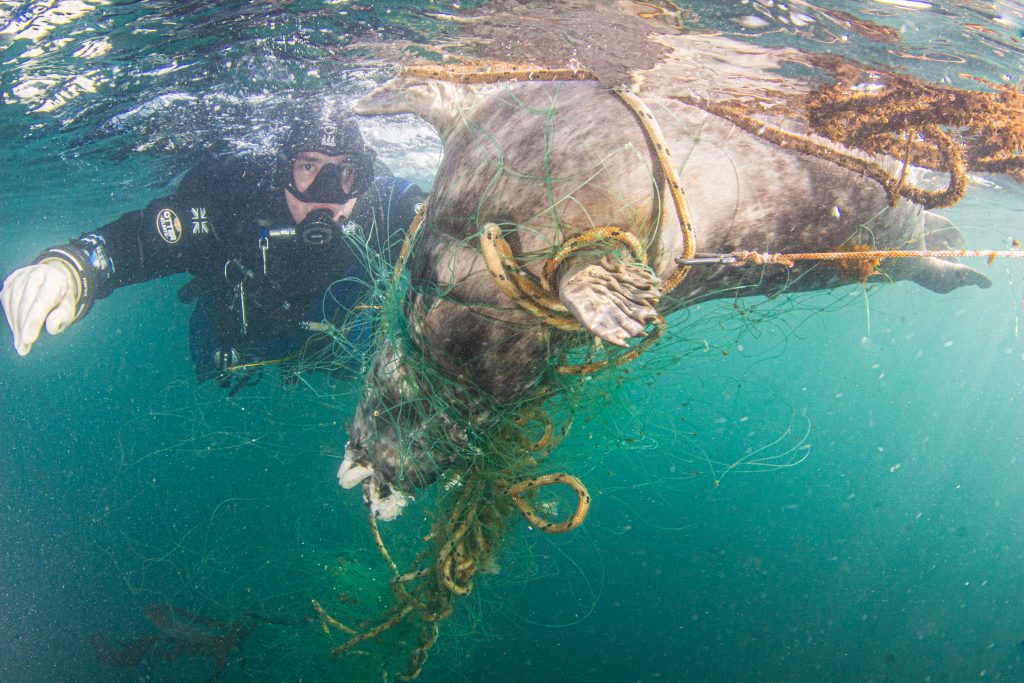 Ghost Fishing UK teams up with Marine Strandings Network to recover the body of a young male seal entangled in a gill net in Cornwall.

Connie Morris of Marine Strandings Network contacted Ghost Fishing UK to ask if we could come and assist with a deceased seal, caught up in a net some hundred metres off Rockpool beach in Mousehole, Cornwall.

Fred Nunn quickly rallied two more divers, Christine Grosart and Andy Rath, so that they could work in a team of three as per the charity’s standard operating procedures for net recoveries.

“I was made aware of a seal entangled just off Mousehole, it clearly had rope wrapped around it, you could see that from the shore, and it hadn’t moved for two days, so there was probably more going on than we could see. It wasn’t that far from shore, and it was a lovely day, so I took the plunge and swam out to it. Nothing prepares you for a sight like this, the amount of gear hanging off it, knowing that poor animal died in a horrible way. No animal deserves to die like that,” Constance Morris, Marine Strandings Network

These volunteers photographed, measured and tagged the seal which was identified as a juvenile male.

The divers photographed and filmed the seal in situ before freeing the gill net and bundling it safely into a bag, so that the team, using a tow rope, could haul the net and seal onto the shore.

BBC Spotlight also came to the scene to film and interview the team and the show was aired the same night and an article published on bbc.com.