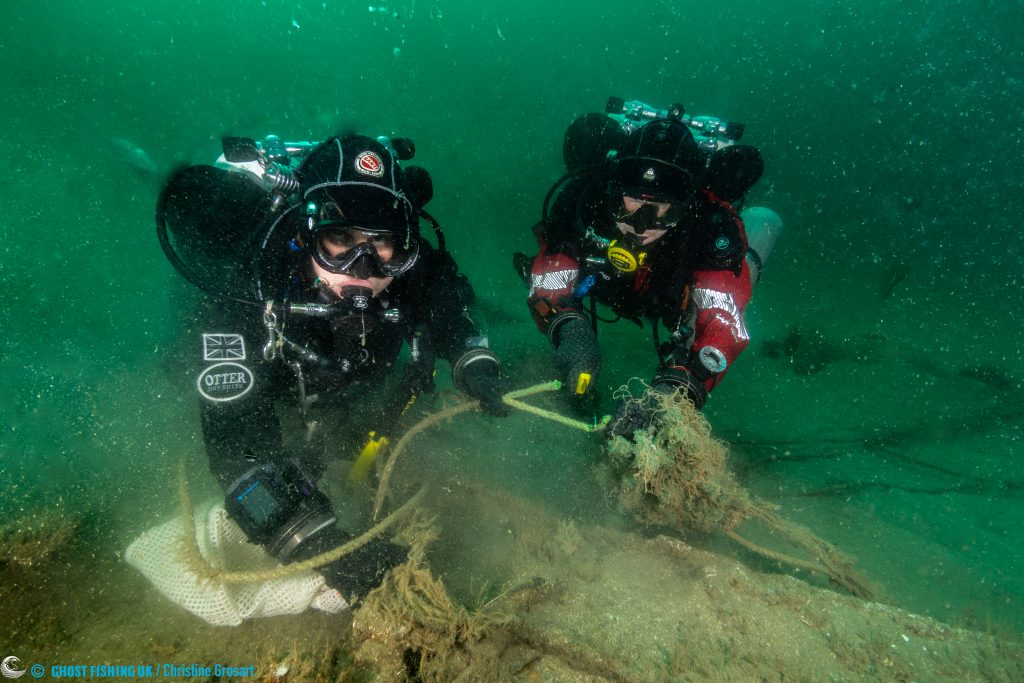 Almost 200 kilograms of lost fishing gear known as ghost gear has been recovered from the seabed by volunteer divers from the charity Ghost Fishing UK, in a collaborative project with Sussex Wildlife Trust.

The charity Ghost Fishing UK responded to reports from scuba divers in the Brighton area to locate and survey lost fishing nets on the shipwreck of the SS Pentyrch, before making a plan to remove it.

Lost or abandoned fishing gear is problematic in our oceans, with an estimated 640,000 tonnes lost into the sea globally each year. The lost nets and pots known as ghost gear continue fishing non-stop. The catch is never landed and the trapped animals act as bait for others, in a non-stop cycle of wasteful deaths known as ghost fishing.

The team brought the net back on board the diving vessel Channel Diver operating from Brighton Marina and the net will now be stored for recycling. Despite Covid-19 restrictions, the team underwent daily testing and diligent hygiene in order to carry out the mission.

This was the second mission the team of volunteers had undertaken in the Sussex region this year following plentiful reports by scuba divers of lost nets fouling the wrecks in the area, causing a hazard not just to them, but the wildlife along the Sussex coastline.

Working in 18 metres of water, the visibility was good and the divers have so far this season been able to recover 275 kilograms of lost nets in just three dives.

Trustee and underwater photographer for the charity Christine Grosart said: ‘The team were delighted to be asked to join up with Sussex Wildlife Trust’s Wild Coast Sussex project. It was great to have them on the boat so that they could see what goes on at the sharp end of our charity, removing ghost gear from the sea and it was great to finally start cleaning up the Sussex region where we had not been before this spring.’

Wild Coast Sussex was set up to inspire local communities to care for the marine environment and enable them to protect their coast and sea.

As part of a National Lottery Heritage Fund grant, working with the Marine Conservation Society, Sussex Inshore Fisheries and Conservation Authority and SEA LIFE Brighton, the project aims to:

Ghost Fishing UK was invited to get involved owing to their extensive experience training divers to survey and safely recover lost fishing gear, which is found via their online reporting system that is open to both fishermen and divers.

Nikki Hills, project manager for Wild Coast Sussex joined the team on board Channel Diver this week. She told us: ‘It was fantastic to join the Ghost Fishing UK team on a trip to recover ghost nets off the Sussex coast and see first-hand the dedicated work of the divers and the amount of net they managed to remove.

‘Removing this net is so important because if left, it can trap precious marine wildlife and add to plastic in the sea. The Wild Coast Sussex project is really pleased to support the work of Ghost Fishing UK and it’s great to have them in Sussex.’

The SS Pentyrch was a cargo steam ship, torpedoed in 1918. Plenty of the wreckage can still be seen protruding from the sandy seabed. Unfortunately, these protrusions snag on fishing nets and can cause them to break away. They then continue to fish until they can be removed.

Christine Grosart continued, ‘We are very grateful for the reports from divers about these nets. We are also very keen to work with the fishing industry to get these unfortunate losses, which are not deliberate, back out of the sea. We would urge fishermen to tell us if they have lost any pots or nets so that we can see if it is possible for us to remove and then recycle them, or in some cases return them, keeping them out of the ocean forever.

‘We have launched a reporting system dedicated for fishermen so that they can report losses to us in confidence.’

Ghost Fishing UK also works with the key organisations involved in the project, such as Seasearch and the SeaLife Trust and are available to give talks to schools and interested parties about the work they are doing to raise awareness of the issues affecting our oceans.

Hear more about the Sussex missions in this webinar recording: