Skip to content
GhostFishing UKBlogMy journey from diver to instructor 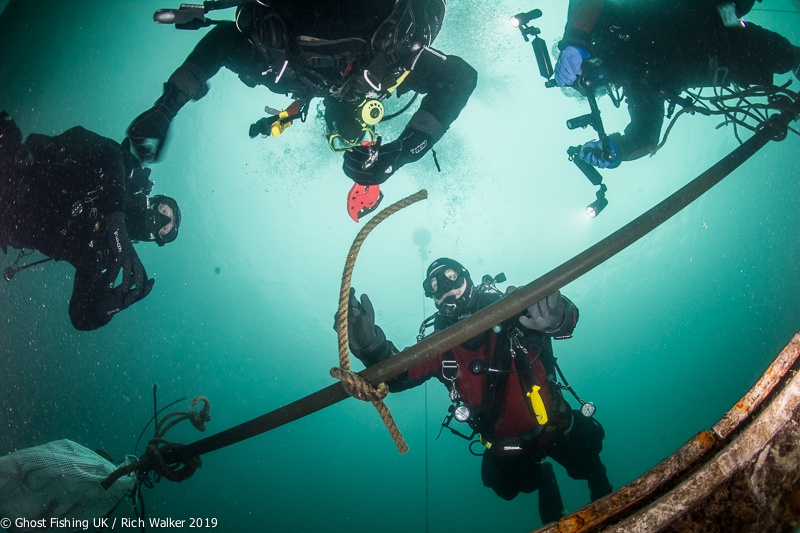 Our instructor team is made up entirely of volunteers. Here instructor Jason Bramwell recounts how he joined Ghost Fishing UK and learned to survey and recover ghost gear, and how he moved on to teaching these skills to others himself.

I first got involved with Ghost Fishing UK almost three years ago in August 2017. This took the form of a ‘taster’ day that was held in Portland, Dorset where there was a brief introduction to Ghost Fishing UK followed by some basic introductory dives where we would do a light clean, more of a litter pick really, on a couple of wrecks down there. I enjoyed this initial experience and later that year attended a more thorough training course that was held in Scapa Flow, Orkney where I received a more thorough education in the techniques and skills required for this kind of work. At the end of the week I had graduated to become part of the Ghost Fishing UK team.

Fast forward to January 2018 where Ghost Fishing UK held their first ‘Winter Warmer’ event (again held in Portland, Dorset) to act as another introductory event to recruit potential new team members. My role was to help an existing instructor delivering training content and sharing knowledge and experiences. I guess I must have done something right as after this event I was considered by the Ghost Fishing UK committee to be a pair of ‘safe hands’ and unbeknown to me someone that could start the journey to becoming a Ghost Fishing UK instructor.

I again signed up to the Ghost Fishing UK annual week long mission which was to be held in Scapa Flow, Orkney, only this time I was to be delivering a course. Prior to the course I had some e-mail based coaching from Rich Walker the chairman of Ghost Fishing UK teaching me some different techniques on how to effectively teach and deliver content to students. This helped to prepare me for delivering my first course but there is nothing like doing it for real. On the boat there were three students completely new to Ghost Fishing UK, three trainee-instructors (me being one of them) and three instructor-trainers. The trainee-instructors would rotate through delivering theory and on-land practical sessions to the three students and then when it came to the in-water training we would work on a more one-to-one basis. All this was under the eyes of the instructor-trainers and they would step in and correct anything that could be improved. After each dive feedback was given between student and trainee-instructor and also between trainee-instructor and instructor-trainer. I’d learnt previously that feedback is an important and valuable training tool and should be encouraged rather than treating it as criticism. All seemed to go well and by the end of this week I had graduated as a Ghost Fishing UK instructor!

2019 was a busy year for me with Ghost Fishing UK with a variety of trips running from both Portland, Dorset and Falmouth, Cornwall. At the end of this year in October I taught my first course as a fully-fledged instructor. This was quite a nice introduction to teaching as it was a well-attended course. This meant that we needed three instructors so the instructors were able to work together to deliver the course content for the out-of-water activities and I had some form of support there to fall back on should it have been needed.

Prior to being involved with Ghost Fishing UK I had never really had any interest in instructing but I do like sharing my experiences and helping others. This may sound contradictory but it is confidence and authority that I lack. I don’t mind buddying up with an inexperienced diver and working with them as a peer but I find it difficult to take the lead and deliver course content to divers who often hold much higher diving qualifications than me. I get a bit of impostor syndrome here thinking “Who am I to teach these people”. Christine Grosart, the Secretary of Ghost Fishing UK and the author of the initial course put it best when she explained to me that we are actually the experts in this particular field and while the students may have more diving experience, that doesn’t mean they know all the risks and the best ways of working when it comes to working with ghost gear.