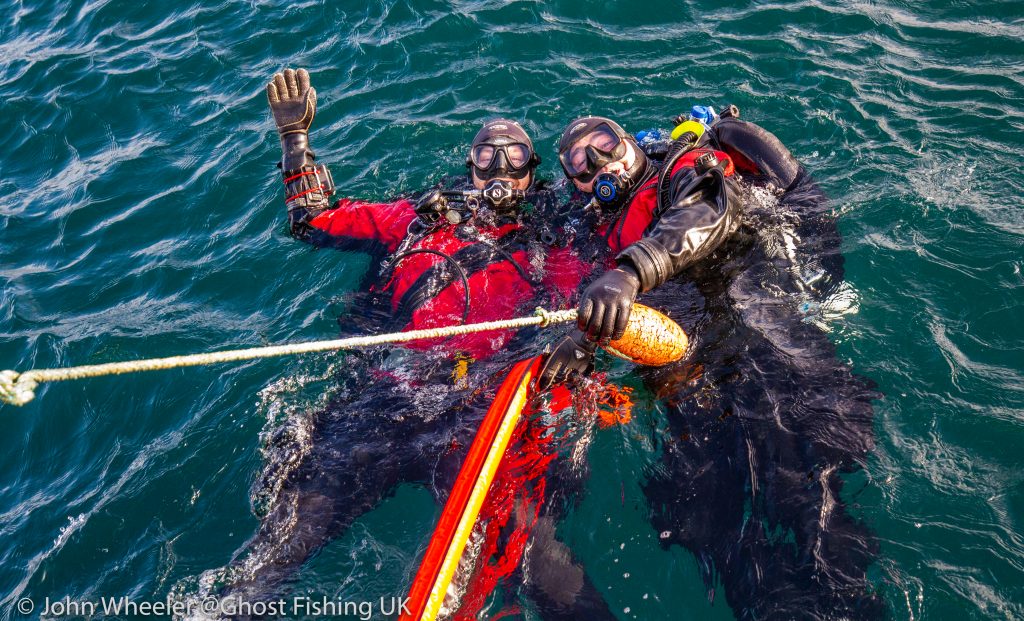 Ghost Fishing UK welcomes divers from all training agencies. British Sub-Aqua Club (BSAC) diver Chris Hawes joined near the very beginning of Ghost Fishing UK and tells how he developed his own skills to become an effective and valued member of the team.

The first time I heard about Ghost Fishing UK was back around 2015. I was sitting in the clubhouse of my dive club (Bristol BSAC No. 3) surrounded by the usual mix of divers you see in a BSAC club. A healthy combination of recreational divers, young trainees and technical divers, who were often brought down to earth by the older generation, many of whom have been diving for over thirty years (and are still convinced Nitrox is voodoo gas).

At the time, I’d just completed my Sports Diver qualification and was keen to extend the duration of my dives. I needed two cylinders of breathing gas (a twin-set) to have more time underwater than my single tank setup. Thanks to some skilful eBaying, I acquired a twin-set, backplate and wing. Importantly, I was convinced it just looked cooler, too. While sitting at the bar, Fred Nunn (Ghost Fishing UK Trustee and Operations Manager) and Mark Hall (Ghost Fishing UK Webmaster) were chatting about a project they were off to do in Scapa Flow, Orkney. On hearing about the plight caused by Abandoned Lost and Discarded Fishing Gear (ALDFG, to give it its proper, confusing acronym) I knew I had to get involved.

So there I was, a recently qualified Sports Diver with next to no twin-set experience, but full of enthusiasm. Luckily, I’d been trained by Fred and Mark, and their focus on trim, buoyancy and in-water comfort was about to pay dividends. I set about my BSAC twin-set training, read the manual cover to cover several times, and made sure I was more than comfortable in my twin-set. Thanks to the commitment of Mark and Fred (or realisation that until I finished the course I wouldn’t shut up) I completed the course and was signed off.

After around fifty or so dives in my twin-set – including a decent amount of deco diving (longer or deeper dives where I needed to stop during the ascent from the seabed to avoid ‘the bends‘) – I wanted to move on to part two of my plan: BSAC Accelerated Decompression Procedures (ADP).* Again, I basically wanted to dive with a third cylinder because it looks cool. This course would allow me to reduce the time spent coming back to the surface on deco dives by switching to a different breathing gas in the third ‘stage’ cylinder during the ascent. A Black Friday deal came up for a 7 litre aluminium cylinder, stage regulators and rigging kit. I hit ‘buy’, as did someone else in my club (one of the great benefits of BSAC) and shortly after the kit arrived.

Now onto more gentle persuasion of the ADP instructors in my club… In amongst theory and in-water skills, a couple of folks from my club and I spent several dives in our local quarry practicing stage handling, not practising until we got it right, but practising until we couldn’t get it wrong. All of a sudden a project came up, the wreck was the James Eagan Layne out of Plymouth, a site I was very familiar with and one of my favourite wrecks. I trusted Fred and Mark’s training and judgement when they told me I was ready. Aware I was going to be diving with divers from various agencies, I wanted to make sure I represented BSAC well. I won’t go into detail about the actual dive as there’s already an article about it and it was three years ago!

A couple more Ghost Fishing UK projects came up and I was invited again! It’s great to be thought of for projects, and I was chuffed that all the practice had paid off. Some time later I was asked if I’d attend a beta for a course that Christine Grosart (Ghost Fishing UK Trustee) had been working on, and I jumped at the chance. The course took my in-water skills and really honed them, and the teamwork element was driven home too – it was great! What was also great was that I wasn’t the only BSAC diver there, in fact, I counted divers from four agencies! There’s more info on the course in this article, so I’ll not go into too much detail.

Since the course, I’ve been on a Ghost Fishing UK project in Scapa Flow and numerous other clean-ups. Adding a sense of purpose to my diving really does gave me a new perspective.

So, there we go, my journey from BSAC Sports Diver to fully qualified Ghost Fishing UK Diver. I’ve been fortunate enough to be involved in around ten projects and I was even able to sneak fifteen seconds of my grumpy face onto The One Show. If you’re thinking of becoming a Ghost Fishing UK diver, it doesn’t matter which agency you’re with – if you’re willing to put the time and effort in, chances are you’ll make it.

*Ghost Fishing UK does not require volunteer divers to be trained in decompression diving procedures. Divers need to be practiced with a twin-set configuration and qualified to use breathing gases containing 32% oxygen (‘nitrox’). Further details, and a full list of course prerequisites, are available in our FAQ section.