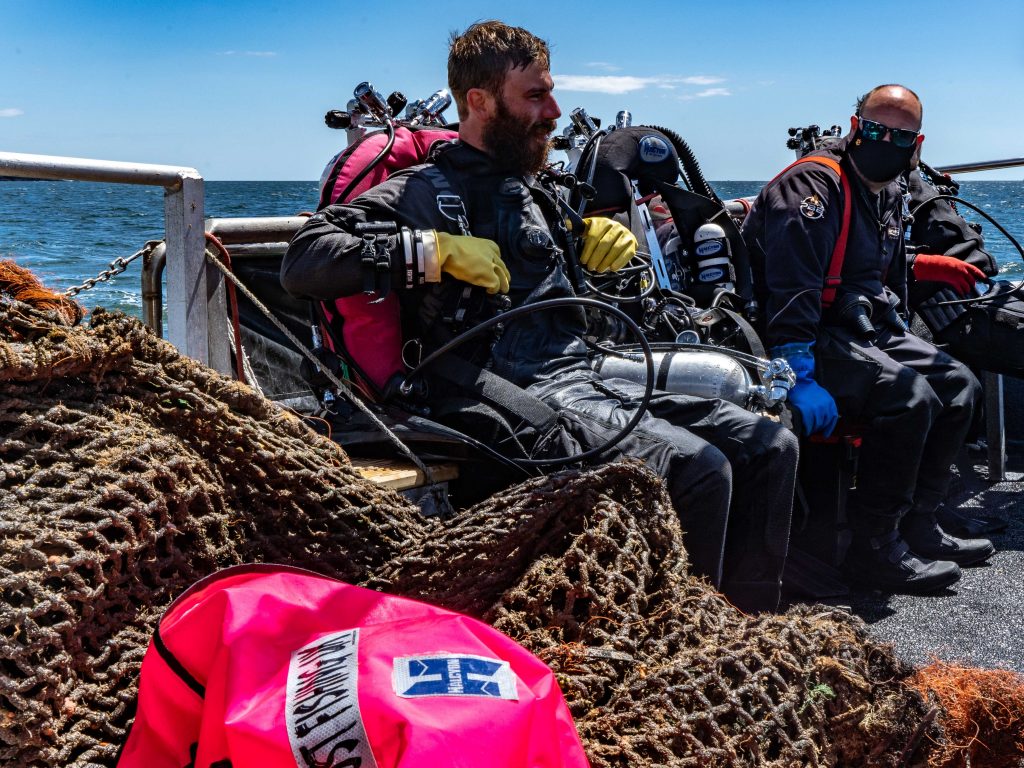 It was five months to the day since our last official event. To say I felt under pressure was an understatement, writes Fred Nunn. On top of all the usual complexities of organising and managing a Ghost Fishing UK project there were the added complications of Covid-19 restrictions.

I also had two volunteer divers on their first project after completing their training course. They’ll be assessed to ensure all their training has been absorbed and they are prepared for the rigours of a full Ghost Fishing UK mission. I was the only instructor available for this project and so I would be busy hopping between the diving teams so I could assess both divers in the water, while also managing the diving.

The divers all arrived at the Mount Batten Centre with plenty of time before ‘ropes off’ so we could have a comprehensive team briefing of the project’s aims, teams, safety, Covid-19 restrictions, load all the equipment onto the vessel and receive a further briefing from the skipper. Then we were off to our first target.

The SS James Eagan Layne – our reporting system had received two sightings of ghost gear on the wreck in the short time since divers had resumed diving after lockdown restrictions were lifted. So we were off to make a survey dive to find and document the gear that we could find.

The divers split into three teams to cover as much of the wreck as possible. Unfortunately the underwater visibility wasn’t great at only two to three metres so searching was going to be hampered if not impossible.

After completing their survey dives the teams reported back what they had found. They had identified plenty of targets across the site. The surveys would be consolidated for the report and recovery plans would be drawn up that evening over a socially distanced dinner in a local pub.

Our second dive of the day was to search a shallow reef for a string of lost lobster pots that had been reported just the week before. Searching a reef means that we need to cover a much larger area compared to the confines of a shipwreck and with the poor visibility we could be within a few metres of the lost gear and not find it.

The diver teams split up to search in parallel lines along the reef to cover as much area as we could. Of the three teams only one found any ghost gear and somewhat disappointingly it was a single lost pot with a car battery for an anchor, not the string of ten to twelve pots that had been reported. A shotline (a line connecting a buoy on the sea surface to the pot) was attached so it could be recovered the following day.

We prioritised the targets and split the divers into two recovery teams. For the first dive team A would tackle some nets and ropes on the bow of the shipwreck, while team B went for some old trawl net just off the port side on the seabed.

After surfacing from their first dives team A had recovered some of their targets sending them safely to the surface where they were recovered by the surface crew.

Team B’s target, a large section of trawl net, proved more difficult to recover. With limited time available underwater the team had made good progress on the recovery. Attaching lift bags, applying tension to the net and starting the painstaking process to cut it free. But ultimately they had to finish their dive without getting anything to the surface.

Over lunch we decided that the second dive would be staggered with both teams’ objective being the recovery of the large trawl net. This gave us longer to work on the recovery and a degree of flexibility as the teams would have time for a brief handover on the surface for a progress update. Team A was going in first, leaving team B to follow and hopefully complete the recovery or to ‘clean up’ and make safe if required.

Team A’s update was not good news. After attaching more bags to lift the net higher to give better access to the underside, and more and more cutting, they’d not made the anticipated progress to chopping through the sheer mass of net that one diver commented was ‘still the size of a tree’s trunk and we’re cutting at it with divers knives!’ Worse still they didn’t think team B would have the time required to complete the task in the final dive of the project.

Team B started their dive with the resolve to give it their best shot but to save a good reserve of time and gas to collapse all the lift bags and remove them from the net if it wasn’t going to be the desired outcome.

As soon as they got to the ghost net the cycle of cutting before rotating out for a rest started. When working underwater it is important to pause for a rest to prevent carbon dioxide building up. While the safety diver in the team was supervising progress and the safety of the divers working in such close proximity to a billowing mass of potential entanglement hazard time was getting on and breathing gas was being consumed. It was getting near to the agreed gas reserve for giving up and having to ‘clean up’ but the end was in sight! What started out as a trunk was now down to a branch a few inches in diameter.

The divers were anxious and fully aware of the potential lift that was being held by the few strands of net still attached. Slowly and very carefully the strands of net were cut one by one. The shared tension across the strands increases each time the diver cuts one from their number. To the point that the cutting action is no longer vigorously sawing through each strand but just one pass with the serrations of the knife and ping!

It was free and heading to the surface!

The divers had a celebratory fist bump then made their way back to the shotline to make their ascent to the surface.

Once on the surface and recovered by James the skipper of In Deeps‘s dive boat Seeker the real work begins. Marine life survey again and returning any sea-life that had been in the net safely to the water. Then the haul for the day was bagged up and dragged off the vessel and up the pontoon to the trailer ready to take away for recycling.

But one final thing, the weigh in! Using a digital scale on a bar the bag of net is hoisted in the air by all the divers, 127 kilograms. What an achievement! All the stress was definitely worth it. Everyone was equally pumped up and totally exhausted, not least our two freshly passed off divers! Congratulations Kerry and Scott.