Divers often see fishing nets cloaking the shipwrecks they visit. It is a sad sight, not only when animals become trapped, but also when ropes and fishing gear damage fragile underwater heritage. But can lost fishing gear ever become a habitat for marine life? And if so, should it be left in the sea?

The Madame Alice is a cargo steamer that sank in the Firth of Lorn on the west coast of Scotland after a collision in February 1918. She lies on the seabed in forty-two metres of water.

The site is within the Loch Sunart to the Sound of Jura nature conservation marine protected area (MPA), which was designated to conserve the common skate and the unique underwater channels that formed here during the last ice age.

No fishing is allowed in the MPA, although in the part where the Madame Alice lies mechanical dredging and demersal trawls (nets that are towed along the seabed) are permitted in some circumstances.

The Firth of Lorn has diverse marine habitats. There are scarce species and several with either a northerly or southerly distribution that reach their geographic limits here. These include the southern cup coral, northern bryozoans, and species of brittle star, sea fan and associated anemone.

Peter Ellwood, Owen Flowers, Ryan Mcshane, Darren Morley, Andy Pilley, and Marcus Rose headed out on the rigid-hulled inflatable dive boat Cearban in the summer sun. The water was cold, but the underwater visibility was good—at least six metres. An hour-long dive swimming over the wreck confirmed a large ghost net was caught on the port side at the stern. It wasn’t fishing heavily, although half a dozen dead squat lobsters were spotted. Creels were strewn across the hull with many concentrated at the starboard side of the stern.

The net and pots had not been lost very recently! They were covered with a feathery coat of animal turf, and sprinkled with candy-coloured sea squirts and anemones.

Should such nets be left in place then?

Dr Joanne Porter, a marine biologist at Heriot-Watt University and an adviser to Ghost Fishing UK says, “in cases such as this where the dominant encrusting marine life comprises species that are common and abundant in the surrounding area, these can be removed carefully in situ as far as possible and left in the environment. Things like the anemones will reattach and continue to live. On balance it is better to remove the net to prevent mortality of cetaceans, fish and other mobile fauna.”

With their training the team knew they should tackle the net. Returning the next day they split into two waves. Owen, Andy and Darren jumped in first. Carefully removing as much marine life as possible, then attaching lift bags they cut away two sections of net, sending them to the surface. They started cutting out another section before their breathing gas was depleted and it was time for them to go.

Next it was Pete, Marcus and Ryan’s turn. They continued where the others left off, succeeding in lifting another large section of net away from the wreck. 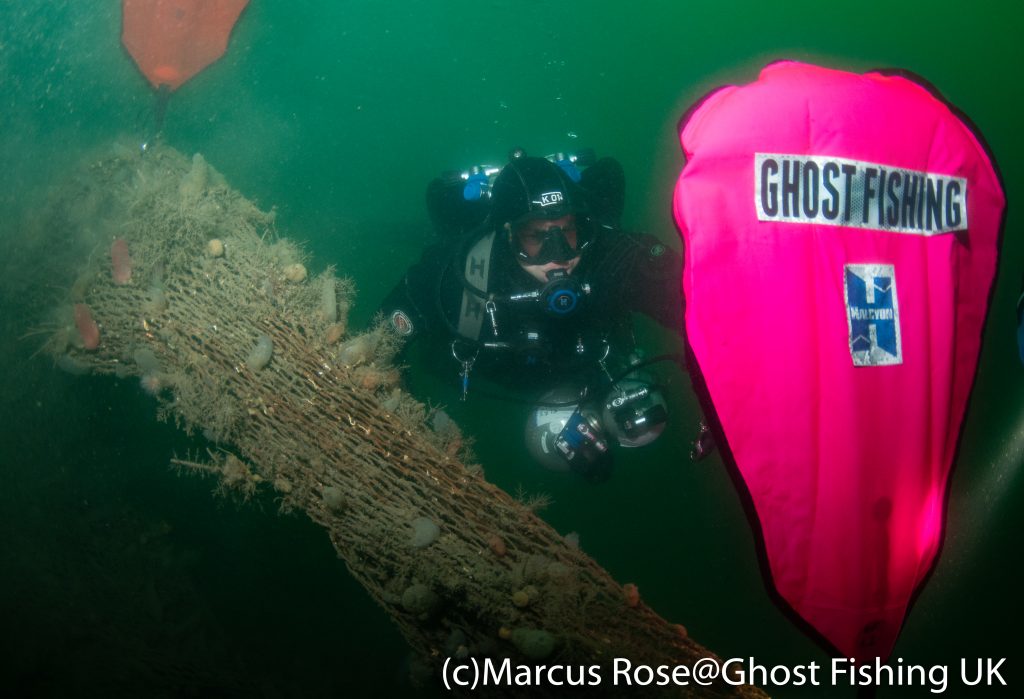 Ryan says “My favourite dive had to be the lift on the Sunday. I was excited to get in as we were doing the final lift and I was diving with Pete and Marcus, who are both solid in the water. Pete and I were doing the cutting while Marcus was the safety diver. It’s a real thrill when the net finally goes up and I remember giggling like an idiot with Pete as we cut the final strand and the silt rained down.”

Towing the net back to a nearby beach was the only option with a small boat. The team began the slow process of carefully cutting up the net ready to be sent for recycling. They chatted with curious locals on the beach and explained what they’d been up to. Saving the sea one net at a time: a busy weekend’s work, but with more to do, they are set to return to the Madame Alice.

Postscript. A Ghost Fishing UK team comprising Alana Dempsey, Owen Flowers, Ryan Mcshane, Darren Morley, Fred Nunn and Andy Pilley, Marcus Rose recovered the remaining net from the bow in late September 2019. Lobster pots are still around the stern of the wreck to be lifted in the future.